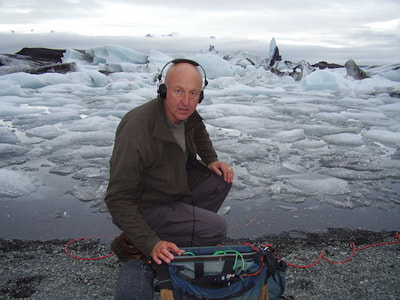 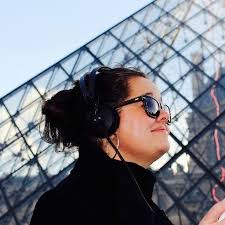 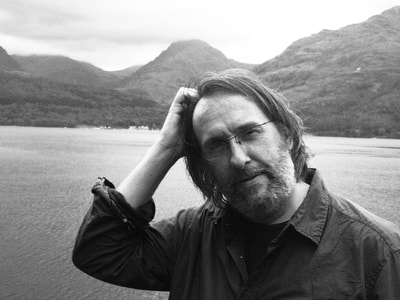 Chris Watson is one of the world's leading recorders of wildlife and natural phenomena, and for Touch he edits his field recordings into a filmic narrative. For example. the unearthly groaning of ice in an Icelandic glacier is a classic example of, in Watson's words, putting a microphone where you can't put your ears. In 1971 he was a founding member of the influential Sheffield-based experimental music group Cabaret Voltaire. His sound recording career began in 1981 when he joined Tyne Tees Television. Since then he has developed a particular and passionate interest in recording the wildlife sounds of animals, habitats and atmospheres from around the world. As a freelance recordist for film, tv & radio, Chris Watson specialises in natural history and documentary location sound together with track assembly and sound design in post production.
​
​Jez riley French (b. 1965)
Using intuitive composition, field recording, improvisation and photography, Jez has
been exploring his enjoyment of and interest in detail, simplicity and his emotive
response to places and situations for over 3 decades.
Alongside performances, exhibitions, installations, JrF lectures and runs workshops
around the world and his range of specialist microphones are widely used by recordists,
sound artists, musicians, sound designers and cultural organisations. He also works as a
curator of live events, a record label, of sound installations and an arts zine ‘verdure
engraved’.
In recent years he has been working extensively on recordings of surfaces, spaces and
situations and developing the concept of photographic scores and ‘scores for listening’,
which have featured widely in publications and exhibitions.
His work has been exhibited in shows and installations alongside that of Yoko Ono,
David Bowie, Pauline Oliveros, Chris Watson, Alvin Lucier, Annea Lockwood, Ryuchi
Sakamoto, Stars of the Lid, Jeremy Deller, Sarah Lucas, Brian Eno, Signe Liden, Sally Ann
McIntyre etc, at galleries including The Whitworth Gallery (Manchester), Tate Modern
and Tate Britain, MOT - Museum of Contemporary Art, Tokyo (Japan), Artisphere (USA).
For the Hull, Capital of Culture year 2017 year in the UK, Jez has created a number of
works including the installation of Icelandic recordings ‘the sound of the world turning’
for John Grant’s North Atlantic Flux festival, and also collaborated with Jan Bang, Arve
Henriksen, Eivind Aarset & Opera North on ‘The Height of the Reeds’, an installation
based sound walk in the Humber Bridge.
….
He has been described, in an interview with the British Library, as one of the most
influential sound artists of his generation, not only for his own creative work but also for
his expansion of extended field recording techniques and modes of listening into key
elements of the sonic arts, film, tv, radio, architecture & the games industry.

​Dr Leah Barclay is an Australian sound artist, composer and researcher working at the intersection of art, science and technology. She specialises in electroacoustic music, acoustic ecology and emerging fields of biology exploring environmental patterns and changes through sound. Her work has been commissioned, performed and exhibited to wide acclaim across Australia, New Zealand, Canada, USA, Peru, Colombia, Europe, India, South Africa, China and Korea by organisations including UNESCO, Ear to the Earth, Streaming Museum, Al Gore’s Climate Reality and the IUCN. She has been the recipient of numerous awards and has directed and curated interdisciplinary projects across the Asia-Pacific and USA. Leah composes complex sonic environments that draw attention to changing climates and fragile ecosystems. These works are realised through live performances, interactive installations and site-specific interventions drawing on environmental field recordings, data sonification, live streams and immersive sound diffusion. Recent examples include augmented reality sound walksexploring the cultural and biological diversity of river systems and Rainforest Listening, a virtual canopy that transforms iconic urban locations into the Amazon Rainforest. Rainforest Listening launched in Times Square for Climate Week NYC 2015 and was a featured cultural event for COP21 in Paris where each observatory platform of the Eiffel Tower was transformed into the four distinct layers of tropical rainforest vegetation through immersive soundscapes accessed through mobile phones. Leah’s work is multi-platform in nature and involves long-term engagement with communities across the globe ranging from remote river systems in South India to pacific island communities in Vanuatu. She leads several large-scale research projects including Biosphere Soundscapes, an interdisciplinary venture exploring the changing soundscapes of UNESCO Biosphere Reserves across the world and River Listening, which examines the creative possibilities of aquatic bioacoustics in collaboration with the Australian Rivers Institute. Leah’s diverse creative practice has resulted in a career where she works as a researcher, artist, consultant and educator with various organisations and institutions. These include designing immersive education programs for UNESCO, directing large-scale interdisciplinary research projects for major universities across Australia and the USA and facilitating partnerships between communities, NGOs and government to explore creative approaches to climate action. She regularly guest lectures for international universities including NYU, Brown University and The Art Institute of Chicago. Leah is the president of the Australian Forum for Acoustic Ecology, the vice-president of the World Forum of Acoustic Ecology and serves on the board of a range of arts and environmental organisations. She is currently a postdoctoral research fellow at the Queensland Conservatorium Research Centre where she is leading a portfolio of research exploring the value of acoustic ecology as a socially engaged, accessible, interdisciplinary field that can inspire communities across the world to listen to the environment.

The invited contributors were Chris Watson, Leah Barclay, and Jez Riley French whose broad profiles have been outlined above. Chris Watson provided 10 minutes of sound captured in the thriving corals of the South China Seas, Leah Barclay provided 10 minutes of sounds selected from her work with the Biosphere Soundscapes, an interdisciplinary research project working in collaboration with multiple organisations and institutions across the USA, South America, Australia, Europe, India, Indonesia and Cambodia. Jez Riley French provided 10 minutes of sound taken from a recording in Iceland of minerals from the sea bed dissolving in a solution that relates to the corrosive levels of pollution at that location. These three contributions offered a global perspective and a highly professional standard and context for subsequent submissions by emergent sound artists.

Artists selected by submission include
Ivon Oates: UNDER AN UPTURNED BOAT' recordings made under an upturned boat lying in a stream on Eype beach, Dorset. The remote sounds of waves, passers by, and dogs on shingle echo within the contained space, while the rippling stream is amplified. Ivon oates’s multi-disciplinary approach incorporates soundwork and digital media with fine arts and architectural/environmental design. She enjoys collaborative projects that engage a deep exploration of consciousness in nature, especially our relationship with the wild. She has exhibited and installed work widely in Europe and UK, and participated in festivals, (B-side Dorset, Whitstable Biennale).
​
David Rogers: Dungeness Tower Shoreline. Recorded using Shotgun Mics (above the surf), Hydro Mics (under the surf) Contact Mics (on the tower). His creative practice includes installation, combining 3D construction, performance and screen based work, single screen, projections, multiple screen works and audio, ranging from soundscapes to compositional sound. Work exhibited in both gallery and non gallery situations.

Rachael Allain: Sternidae Altum Is a subaquatic sound recording capturing the Terns feeding on the turning tide at sunset on a remote South Devon beach at the end of the summer. Sternidae or Terns, sometimes referred to as sea swallows, are migratory sea birds that return to warmer climes in the autumn. Most Tern species are declining in numbers due to the loss or disturbance of breeding habitat, pollution and increased predation. Found throughout the world, they are summer visitors to Europe, spending the winter off the coast of Africa. The Royal Society for the Protection of Birds, RSPB, considers Terns to have an Amber conservation status category.

Andrea V Wright: Dissolve, Cease was written and recorded at a small fishing village in Cornwall for the 2015 Porthleven Prize. Her practice explores the relationships between the formal and indexical employing both geometric and organic structural references. She works both intuitively and systematically through the use of natural and manmade materials and found objects.

Lee Berwick: Dwr (Welsh for ‘water’) was created on retreat in North Wales and uses sonification to explore the potential of enchantment.

Finally, a playful contribution from the SW Trio Wildlife Discotheque who often work with museums and other cultural institutions sharing their vinyl wildlife recordings. These recordings had been gathered over many years from the overgrown, neglected and wilder corners of local charity shops, record fairs, and car boot sales. The discs plot a crackly history of nature sound and the pioneers who spent hours in the field with cumbersome gear and an ear for sound and song.